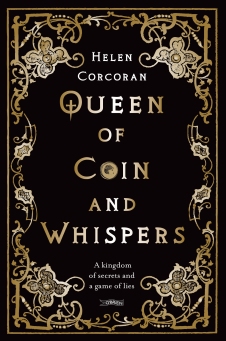 QUEEN OF COIN AND WHISPERS

Add it on Goodreads! | click for higher resolution cover image

Download the free prequel stories, and meet Lia and Xania before they crossed paths in Queen of Coin and Whispers!

‘She loved me as I loved her, fierce as a bloodied blade’

When teenage queen Lia inherits her corrupt uncle’s bankrupt kingdom, she brings a new spymaster into the fold … Xania, who takes the job to avenge her murdered father.

Faced with dangerous plots and hidden enemies, can Lia and Xania learn to rely on each another, as they discover that all is not fair in love and treason?

In a world where the throne means both power and duty, they must decide what to sacrifice for their country – and for each other…

‘Elegant and clever … a treasure chest of a fantasy debut, as rich in well-drawn characters as it is in treachery, secrets and desire … I couldn’t stop reading.’

In this novel marked with twists and betrayals, it is not safe to trust anyone until the final page.

…skilfully-done romance, and Corcoran takes advantage of the fantasy setting to present a world where same-sex relationships carry no taboos. This is a book for everyone (the complexity will satisfy adult readers, too) but I think it will find a particular place in the hearts of young LGBTQ readers for being a love story that involves obstacles other than coming-out, and ends (spoilers!) hopefully ever after